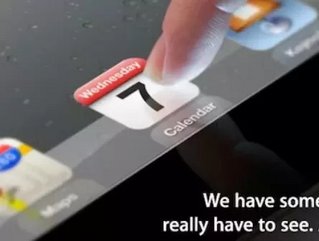 On Tuesday, Apple sent out media invitations to a product event to take place March 7 at the Yerba Buena Center for the Arts in San Francisco. In true Apple fashion, the exact purpose of the event isn’t clear, but it’s widely assumed that the company will be releasing the third generation of the iPad.

“We have something you really have to see. And touch,” the cryptic invitation reads across a picture of an iPad screen.

Apple would never purposely leak details about upcoming products, but analysts and enthusiasts have been buzzing about expected iPad 3 upgrades, including the inclusion of Siri, a faster processor, more internal memory and a higher-resolution screen. The background of the photo on Apple’s invitation shows a finger hovering over the Calendar app (set to March 7) on an iPad screen and suggests that unlike earlier versions of the device, the iPad 3 will not have a physical home button.

How Tablets Can Boost Your Business

Apple Becomes the Most Valuable Company in the US

Sources familiar with the matter told Bloomberg Businessweek that Apple’s manufacturing partners ramped up production of the iPad in January and that it will use a quad-core chip, which will allow users to jump more quickly between applications.

It has also been rumored that the iPad 3 will cost about $80 more than its predecessors. Likely in anticipation of the new generation launch, Best Buy lowered the price of the iPad 2 by $50 over the weekend in a possible effort to move out the soon-to-be-eclipsed inventory.