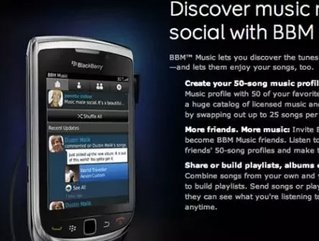 Research in Motion (RIM) announced Friday its new BlackBerry Messenger-based music service called BBM Music. The cloud-based service allows BBM users to discover and share music through a community-based music library. Users can build a personal music profile with up to 50 songs and as soon as you get sick of those songs, you can swap out 25 songs each month. And to add more numbers into the equation, up to 50 tracks from a personal profile are shared with your BBM Music Community and each member of the community can share up to 50 songs from their profile with the user.

To some, allowing a user to only have a music profile of up to 50 songs may seem like a throw-away idea when compared to the massive music libraries offered by Apple and Google’s upcoming cloud music service. But RIM seems to be taking it to the next level by allowing users to build their libraries by adding friends to the BBM Music service. With each friend added to the community, your music collection grows as their song library becomes available to you.

There will be a music catalog with millions of songs from such music companies as EMI, Sony Music Entertainment, Universal Music Group and Warner Music Group. Additionally, a visual timeline will also be available on BBM Music to show updates from your friends like who added new friends and which songs have been removed from libraries.

BBM Music sounds somewhat familiar to Apple’s social music program, Ping, which never really took off. I can imagine that if Apple had little success with a social music community, RIM and BlackBerry may find even harder of a trouble to grab the attention of music lovers and social media junkies. Oh, and did we forget to mention the service isn’t free and will cost $4.99 per month?