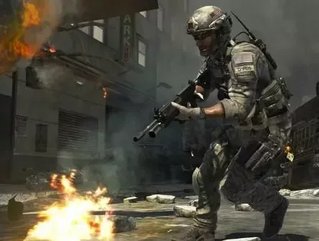 Unless you have spent the last month playing Pong on your dust ridden Atari, you have probably heard about new multi-platform videogame Modern Warfare 3. Statistics say you have probably played it, or have direct contact with someone who does play it, as the sales for the ninth game in the Call of Duty series are as monumentally epic as the COD series itself. As of today, profits for the game hover just over $ 1 billion dollars. And COD-MW3 hit that heroically large cash mark, in a record-breaking sixteen days.

Cold hard cash is not the only thing the videogame reaps in, as players flock to MW3 in the largest active,virtual or not, army ever assembled. According to Activision, the company that makes the Call of Duty trilogy, “With more than 30 million gamers, the Call of Duty community now exceeds the combined populations of the cities of New York, London, Tokyo, Paris and Madrid,” the company boasted in the release.” Those are massive numbers, and multiplied at sixty dollars a pop, MW3 has accumulated enough capital in two weeks to fund a large militia.

Breaking a billion dollars in sixteen days is a new all time record for the entertainment industry, which was previously dominated by the mind-numbing success of James Cameron’s Avatar, which earned the “big billion mark” in a now seemingly sluggish seventeen days. As the Call of Duty would have it, the trigger happy antics of the game have machine gunned their way into the economic marketplace, blasting down competitors as Modern Warfare Three is now the new entertainment property to trump.

Our Favorite Products from E3

ePawn Arena Takes Board Games to the Next Level at E3

Snoop dogg at E3 for Yoostar on MTV Unveil

For those tracking MW3’s success, this big billion dollar blockbuster does not come as a great surprise, given the games immediate track record. Within its first five days of sales, the game sold over $775 million dollars, busting up previous record holder Call of Duty Two: Special Ops by a measly hundred million dollar profit difference. Way to stick it to…themselves.

So what does this mean for the entertainment industry at large? And just what happened to the simple, single platform Titanic earnings of yesterday? They have been replaced by a new hyper platform, multiple-viewpoint, interactive entertainment experience designed to capture and hold the player’s attention from every imaginable angle. Says Robert Kotick, chief executive at Activision Blizzard, “Modern Warfare 3, and other games by us, have a much broader appeal than they have had in the past, with the social nature of the game offering a different type of interactive experience that has not existed before,” he remarked, “As the number of new game consoles has expanded, along with the audience, it’s capturing a new audience that in the past has not considered playing video games.”

Whether the diversity of playing consoles, (MW3 is available on just about every gaming device imaginable), or the diversity of viewpoint modes has anything to do with the game’s monumental sale’s success is indeterminable. Yet for those 30 million gamers who now spend countless sleepless nights droning out in front of their glowing Call of Duty screenshots, the success is awesomely self-explanatory. Call of Duty- Modern Warfare Three is obviously doing something, if  not everything, right.