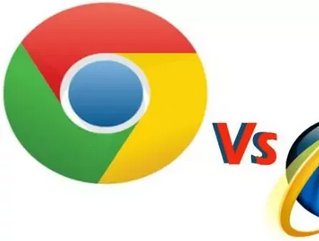 Have you noticed Internet Explorer’s latest ad campaign? It seems like IE’s sleek commercials, packaging the browser as an ultra-hip, high-powered web tool, are in constant rotation. It also seems like they doth protest too much about IE’s appeal.

It’s no secret that IE has been losing steam in recent years and recent data proves that it has fallen from its glory as the Web’s go-to browser.

StatCounter has reported that Google Chrome is now officially the Web’s most used browser, as its usage has surpassed Internet Explorer’s for the first week ever. Unsurprisingly, Firefox, Safari and Opera respectively round out the list of top five Web browsers.

Although it’s impossible to get exact numbers when it comes to Internet use, over the past year, StatCounter’s data has shown that Chrome use has been consistently and unmistakably growing. Back in March, Chrome was able to inch ahead of IE for one day, but May marked the first time it held the number one spot for over a week. Based on all of StatCounter’s May data, Chrome is actually expected to earn its month-long first place ribbon at the month’s end.

Internet Explorer has had a good run, dominating the browsing experience since its launch in 1995. But it seems that Google Chrome, which was released in 2008, has a portfolio of features and extensions that even casual Web browsers find attractive and useful. Its minimalistic interface is simple to navigate and its trailblazing combination address/search bar (or Omnibox) is a major draw.

What’s more: StatCounter has also determined that Internet Explorer is more popular on weekends than it is during the week—a trend that chips away at the popular assumption that people only use IE when they have to at work and lends credence to support of the latest version of the browser. StatCounter compared all versions of Chrome combined with the individual versions of other browsers and found that IE versions 6, 7 and 8 lose popularity during the weekend, but version 9 spikes during that time.