It's official: Apple launches the iPhone 6, iPhone 6 Plus and the Apple Watch 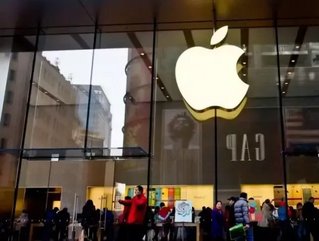 Apple has released a 5.5-inch iPhone, called the iPhone 6 Plus, marking the tech giant’s first foray into the phone-tablet hybrid (phablet) market. It also released the 4.7-inch iPhone 6 and the Apple Watch at an event in Cupertino, California.

READ MORE: How many iPhone 6's does Apple expect to sell?

Key features few of the iPhone 6 and iPhone 6 Plus:

There has been much speculation leading up to Apple’s event today, with many critics wondering if the company would indeed develop a larger screen. However, it is really a no-brainer for Apple, seeing as it is thought that in three years, phablets will outsell both laptops and tablets, according to a report from market research firm IDC.

The company separately introduced Apple Watch, available in two different sizes with a sapphire crystal display. Apple's first foray into the highly anticipated wearables market will be available "early next year" for $349 and up.