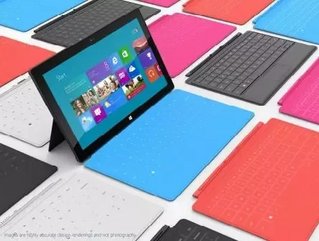 You didn’t think Microsoft was just going to sit back and watch the iPad completely saturate the tablet market, did you?

This week, Microsoft boldly stepped up to its number one competition by unveiling the Surface—a PC tablet that runs the still unreleased, much-anticipated Windows 8 operating system, expected to be released this fall. Surface was designed by Microsoft under a cloak of secrecy over the past several years, making it the first commercial PC that the company has designed and sold itself, without involvement from any of its longstanding hardware partners.

Since the big reveal at a press event Monday, tech analysts and bloggers have been praising the Surface as an “incredible tablet device” that “shames the PC industry” and just may be “better than an iPad.”

Say it ain’t so! Someone outside of the Apple camp made a tablet that could beat all of the innovation and hype of the iPad?

While Microsoft is not yet revealing Surface’s exact release date or price, here’s what we do know:

-It will feature a 10.6-inch display, a kickstand for optimal viewing options and an ultra-thin keyboard case that attaches via magnets.

-Two versions will be available: Surface Pro with Windows 8 Pro and Surface with Windows RT. Windows RT is similar to Windows 8, but designed for ARM processors and has a touch-friendly Metro-style interface and a limited version of the Windows desktop.

-The Windows RT version will be about 0.36 pounds and weigh about 1.6 pounds. They will feature a micros slot, USB 2.0 and a Micro HD port and be available with either 32GB or 64GB of storage.

-Surface Pro tablets will be Intel-based and have access to both the Metro UI and a fully-functional Windows desktop. They’ll weigh just under two pounds, stack up to be about half-an-inch thick and have a microSDXC card slot, USB 3.0 and Mini Display Port, with the option of 64GB or 128GB of storage.

Overall, Microsoft’s Surface is exactly the device it set out to create—a “companion hardware innovation” for Windows 8.

Its sleek style is showcased in Microsoft’s one-minute Surface advertisement, which has drawn almost 1.6 million views since its YouTube release yesterday; underscoring the public’s enthusiasm for the tablet’s unveiling.

We can, however, think of one group that’s probably not thrilled about Surface. Microsoft’s aforementioned hardware partners, including Hewlett-Packard and Dell, were intentionally left out of Microsoft’s Surface development, as Ballmer indicated during the unveiling that the key to Microsoft’s plan to do Windows 8 proper justice and compete with Apple was developing a tablet on its own.

“The move is a vote of no confidence in these partners, who should rightly feel slighted…or challenged,” said Ovum analyst Jan Dawson.

Hewlett-Packard has declined to comment on the matter, but Dell spoke up to say that its relationship with Microsoft is still intact.

“We remain a committed partner of Microsoft and are continuing to develop a full slate of Windows 8 products,” Dell told tech site Benzinga.