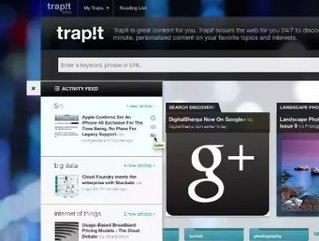 We’re all familiar with the standard search engines such as Google and Yahoo, but there is a new technology on the scene that does more than just search the web – it discovers it.

Trapit, which is a personalized discovery engine for the web that’s powered by the same artificial intelligence technology behind Apple’s Siri, launched its public beta last week. Just like Siri, Trapit is a product of the $200 million CALO Project (Cognitive Assistant that Learns and Organizes), which was the largest artificial intelligence project in U.S. history, according to Mashable. This million-dollar project was funded by DARPA (Defense Advanced Research Projects Agency), the Department of Defense’s research arm.

Trapit, which was first unveiled in June, is a system that personalizes content for its users based on keywords, URLs and reading habits. This service, which can identify related content based on contextual data from more than 50,000 sources, provides a simple, carefree way to discover news articles, images, videos and other content on specific topics.

Since its first unveiling this past June, more than 10,000 participants have been testing out Trapit and using it to find and “trap” content.

“We’re revolutionizing the way people will access content on the web,” Trapit CEO and co-founder Gary Griffiths said, according to VentureBeat. “This is the web following you.”

The way it works is you tell Trapit what you want to discover by typing in a keyword or two. Then the intelligent discovery engine goes to work and scans an archive of data collected throughout the past 30 days. Within seconds, Trapit will give you up to 100 pieces of content related to your keywords. You can then “trap” these results by saving them to a topic-based information stream. Once trapped, this intelligent discovery engine will continue to snag related content from the web and add it to the trap.

“You need technology to discover [content] for you,” Griffiths says.

And although some of the features of Trapit are very similar to Google, the company claims it is not in the business of search. “We don’t think of ourselves as a search engine,” says Trapit co-founder Hank Nothhaft, according to Mashable. “We do think the web is shifting from search to discovery.”