What Can We Expect from Android in 2012? 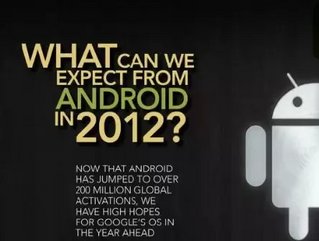 One of the great things about the Android operating system is that it is constantly transforming from one incarnation to another. While all the versions so far have had their own plus points, the latest, Ice Cream Sandwich, is bristling with lots of goodies that haven't been seen before. In the next year or so we could see even more transitioning of the Google-developed OS that could make it even more of a success all over the world.

Ice Cream Sandwich is basically version 4 of the operating system already found on many tablets and smartphones, but word is out that there is already work being undertaken to produce the next edition. In fact, it's already been dubbed Android Jelly Bean, while the rumor mill has also got well under way with lots of new features either anticipated as a possibility or penciled in as a dead cert.

For starters, many people are hoping for a full mobile-ready version of the Chrome browser that has been developed by Google. This would really set the Android Jelly Bean OS ahead of the game with some tweaks to the Internet experience that would make it hard to resist. In terms of improving the user experience, it also seems likely that there may be some kind of integral file browser, too in order to allow users to enjoy a much more seamless management of their digital data.

And staying with the subject of usability, the keyboard input options should also have something of a makeover come the next edition of the Android OS, in order to iron out any of the current minor frustrations that people encounter, particularly when using the smaller virtual keyboards found on-board many smartphones.

Perhaps one of the other most important tweaks could also come in the shape of better power management features, because many of the current smartphones and tablets are so heavy on battery usage that they’re actually turning some customers off from Android all together.

Of course, one thing that we pretty much know for sure is the fact that the interface will get a good old makeover as well. Although many smartphone and tablet manufacturers already produce their own custom touches that overlay the core Android features, it's more than likely that Android itself will be able to benefit from a revamp that will make it even better to look at than it is now.

So, with all of this tweaking and fine-tuning going on, when will Android fans be able to get their hands on this new and improved interface? Well, if the stories are true then Google is working hard to deliver the update at some point during the next twelve months. However, in the meantime, there is still more than enough to enjoy in the latest version of the OS. One thing is for sure though—each successive version is always an improvement over its predecessor.

About the Author: Rob Clymo writes on behalf of Broadband Genie, a site that allows users to compare broadband ISPs, mobile Internet access, smartphones and netbooks.