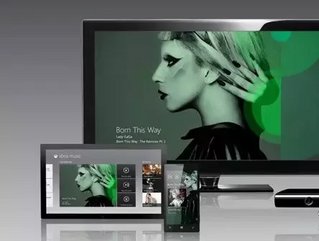 Microsoft announced today its Internet-based music service solution, Xbox Music, which will roll out to Xbox systems starting Tuesday and Windows 8 on October 26th. An all-in-one music service, Microsoft touts Xbox Music as a software solution designed to allow users to listen to music “in exactly the way they want.”

Combining free-streaming radio, a music subscription service and music purchasing options, Microsoft explains they hand-picked the best competitor services and brought them all into one place, thus preventing users’ need to “service hop” when wanting to listen to their favorite music.

Before Xbox Music, Microsoft explains, a user would have to utilize a combination of Pandora, Spotify and a music purchasing service such as Amazon or iTunes to get exactly the music they want.

“There are a lot of individual services that do a good job, but today there isn’t a service which can pull together the benefits of download-to-own, music subscription, or free streaming services,” said Yusuf Mehdi, corporate vice president of Microsoft’s Interactive Entertainment Business Marketing and Strategy. “With Xbox Music, what we wanted to do is bring all of that value in one simple, easy-to-use service, then build some additional value on top — make it really beautiful, and have it work across all of your devices. We’ve been able to simplify the music experience in a really powerful way.”

“I’m excited as a consumer because I myself am a big music fan and this really will replace all of those other services I’ve been using,” Mehdi says. “From a business perspective, Xbox Music is a great way to show the world what Xbox means for broader entertainment on their phone, tablet, PC or console.”

Pre-installed as the default music player on Windows 8 OS, Xbox Music will feature free, ad supported streaming music available on PCs and Tablets as well as a Xbox Music Pass for $9.99 a month allowing users to take their music to the cloud and play their music library anywhere.

“All they’ll need to do is sign in, and they’ll instantly have all of their content on that device, including access to the playlists they’ve built,” said Scott Porter, principal program manager for Xbox Music.