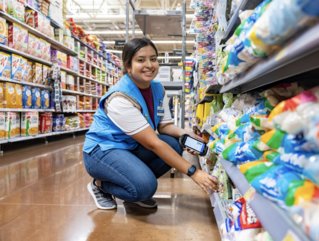 With the United States and Canada announcing falls in inflation, it may appear like the worst is over for US consumers. However, while prices may not be rising as fast as they were, there is still an upward trajectory for household expenditure with US inflation still standing at 8.5%. Put into context, in 2015 the annual inflation rate was just 0.7%.

Retail giant Walmart is one of the discount retailers benefiting most from the tightening of proverbial belts around the country, with more middle and high income households heading to their stores in a bid to combat soaring grocery prices.

In its latest fiscal Q2 update, Walmart reported sales up a healthy 8% but also narrowing profit margins, as shoppers concentrate on the basic necessities (like food) rather than discretionary spend (clothing).

“We expect inflation to continue to influence the choices that families make and we’re adjusting to that reality so we can help them more,” Walmart CEO Doug McMillon told analysts on a conference call on 16 August.

Net income rose to US$5.15bn for the quarter, compared to US$4.28 last year. Interestingly, online sales remain strong, rising 12% YoY. Walmart International sales were US$24.4bn, up US$1.3bn (and could have been a billion higher were it not for currency fluctuations). Mexico, Canada and China all posted double-digit growth.

“We’re pleased to see more customers choosing Walmart during this inflationary period, and we’re working hard to support them as they prioritise their spending,” said McMillon.

“The actions we’ve taken to improve inventory levels in the US, along with a heavier mix of sales in grocery puts pressure on profit margin for Q2 and our outlook for the year. We made good progress throughout the quarter operationally to improve costs in our supply chain, and that work is ongoing. We continue to build on our strategy to expand our digital businesses, including the continued strength we see in our international markets.”

Consumer confidence returning to US ahead of Retail Sales figures

Consumer confidence is returning in the US, thanks in no small part to the drop in gas prices – a whole dollar per gallon. Higher interest rates introduced by the Fed also seem to be working, and many analysts expect the next hike to be closer to 0.50% rather than a further 0.75%.

While the recovery is far from over and inflation still at levels not seen for decades, this could be a pivotal moment for the US economy while external pressures continue to mount.