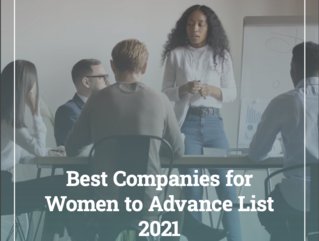 Women make up nearly half (48%) of the total workforce, but executive teams are still overwhelmingly composed of white men – 67%. Closing this gap is a complex problem, but some companies are tackling these issues by taking intentional steps needed to drive real change.

Among companies taking such steps, and succeeding, are Airbnb, PepsiCo, Clorox, Ralph Lauren, Nasdaq, Deutsche Bank, and Best Buy – organisations that have taken Profit.Org’s ParityPLEDGE and subsequently designed policies, benefits, and programs to eliminate barriers to women’s advancement in the workplace that have proven results.

They are among 34 organisations recognised as world-leading in female advancement, according to the Best Companies for Women to Advance List (ParityLIST) 2021.

One-third of intentional companies have a female CEO, compared to 5.5% on the S&P 500

These 34 companies represent those that have unanimously succeeded in implementing intentional policies. They all have a zero-tolerance policy for harassment, a safe compliant system for employees, regularly communicate their gender-equality values to employees and encourage men to take their fully family leave.

Most of them also regularly measure and report to the executive team on gender equality metrics (88%), communicate their gender-equality values to employees (86%), and offer flexible working hours (98%).

More than 9 in 10 require recruiters to include at least one qualified woman on candidate slates for executive positions reporting to the CEO and 84% conduct an annual assessment for managerial women’s career progression.

The improvement in gender parity among these companies in just one year, from 2020 to 2021, have been significant – in part thanks to the pandemic and to the ‘intentional’ measures these companies have taken, as part of the ParityPLEDGE.

"This year, possibly in response to the pandemic, we found that more companies had adopted and expanded best practices for gender equality,” says Stickney.

But that’s not all. More companies made a public commitment to gender parity at the executive level (85% in 2021, up from 77% in 2020). Even better, 44% of companies have now made a commitment at the director level, up from 26% the year before, helping ensure women have the same opportunities as men to rise through management.

Intentionality is the key to gender parity success

Being intentional has been crucial to these organisations securing gender parity success.

While last year, 93% of those on the list reported that they had a specific equal-pay plan in place, but only 45% had successfully reached pay parity, this year, 72% of companies say they have reached pay parity. And this year’s list proves that being intentional pays off.

"Intentionality is crucial in driving change and making progress toward a more diverse slate of leaders across the corporate landscape," says Cathrin Stickney, Parity.Org founder and CEO.

Ralph Lauren is one of the companies on this year’s list, applauded for its policies and programs that support women’s advancement in the workplace.

Another is Nasdaq, which took the ParityPLEDGE in 2017 and since then has fulfilled that pledge by addressing all open roles VP and higher. “In just two and a half years, 50% of all new executive hires have been women,” says Supriya Jha, SVP Diversity & Inclusion, Nasdaq.

For Best Buy, also on the list, the ParityPLEDGE proved a good push. “It created heightened focus for gender diversity across the entire company,” says Kamy Scarlett, CHRO US Retail at Best Buy. “We started at the top, and it was intentional, believing that if you can’t see it, you can’t be it.”